The Layton Boulevard Neighborhoods contain four urban commercial corridors. The surrounding residential areas are stable, but transitioning from ethnic European to mixed areas with a larger number of Hispanic homeowners. A great deal of industrial redevelopment has occurred in the Menomonie Valley to the north, and former industrial areas along the western edge of the area are transitioning to big box commercial. Miller Park Stadium is located nearby.

Place Dynamics was contracted to evaluate the market opportunities for each of the four commercial corridors, and provide strategies to help them realize their development potential.

Three of the four corridors serve a local population. Greenfield Avenue and Lincoln Avenue are best suited to attract new commercial uses. In particular, Lincoln Avenue could be positioned to serve a major employment center surrounding a nearby hospital.

Recommendations for Burnham Street included centering commercial activity around two nodes, while introducing new multifamily housing between them. This might be an area where the City can explore developing a food truck court.

National Avenue, dubbed “Silver City” at a time when workers in the Menomonie Valley frequented its taverns and other businesses, continues to be the strongest of the area commercial corridors. Traffic on this arterial road, and its proximity to Miller Park and the State Fairgrounds, allow it to support several ethnic restaurants. These were seen as the core of an international district that could be created, drawing customers from throughout the region to its shops and restaurants. 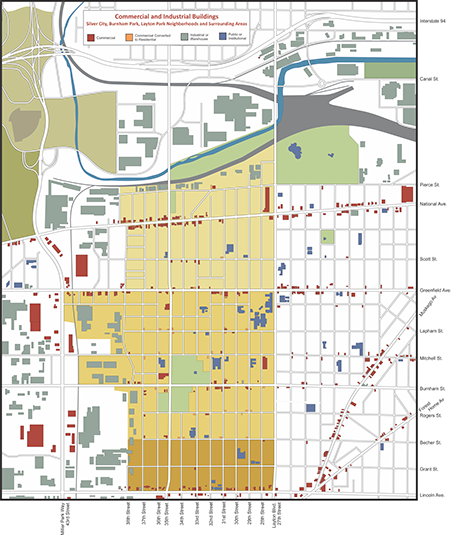