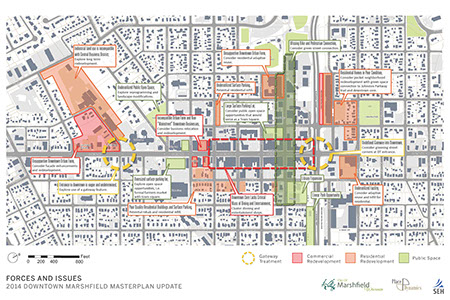 Marshfield was one of the first communities in Wisconsin to establish a Main Street Program for its downtown, and has sustained a commitment to its central business district for decades. When it came time to update their downtown plan they turned to Place Dynamics for a plan that would emphasize market and economics over design.

Our project began with a detailed market analysis addressing current and future demand for housing, retail, dining, and office uses. There is demand for all of these. In fact, there is more specialty retail in the downtown than in the enclosed mall. The downtown has the potential to become a destination district that can compete with stronger centers a half hour away.

The strategy is a targeted one. Priority redevelopment area were selected based on the uses and land area that the market can support, and other sites were designated as long-term opportunities. A half block adjacent to the arts center was chosen for a town square, and an butting street will be redeveloped as a green corridor connecting to a new library.  Changes to city regulations will make it easier to provide housing downtown and to use parklets for outdoor dining.

The strategy for business development has many facets. One key element was to designate a core retail district in which other uses will be discouraged. New businesses will be developed through a combination of startup assistance and business recruitment targeting independent operators and small chains in the region. The district will be supported through marketing initiatives including online and mobile applications.

The plan was adopted in 2015 by unanimous votes of the Plan Commission and Common Council. Funding was already placed in the 2015 budget for implementation. A private developer has proposed new housing in the adaptive reuse of one of the district’s largest buildings. The City is moving ahead with plans to begin developing the town square on property that it has acquired.