Marquette is the largest city in Michigan's Upper Peninsula. The city grew as the market center and shipping port for mining communities throughout the area, and its prosperity has been closely tied to the economic health of this region. This is a concern as the Upper Peninsula continues to age and lose residents. All but two of its mines have closed and the region has still not fully recovered from the loss of an Air Force base in 1996. Marquette, though, has embraced tourism and has two stable employers in its hospital and Northern Michigan University. Its downtown is a thriving destination district with excellent dining and specialty retail shops. Unlike the rest of the region, Marquette is beginning to attract retirees and young people who want to live in a vibrant community surrounded by outstanding recreational assets.

Place Dynamics created the City's first economic development plan in 2011 and returned to update the plan in 2016. Our unique approach to economic analysis lies at the heart of this plan. Looking closely at data for the area, we were able to identify critical several issues to address in the plan, such as:

In addition to these items, the strategy addresses issues such as redevelopment, sustaining the downtown, supporting anchor institutions, and developing a collaborative approach to economic development in the region, as well as within city limits. 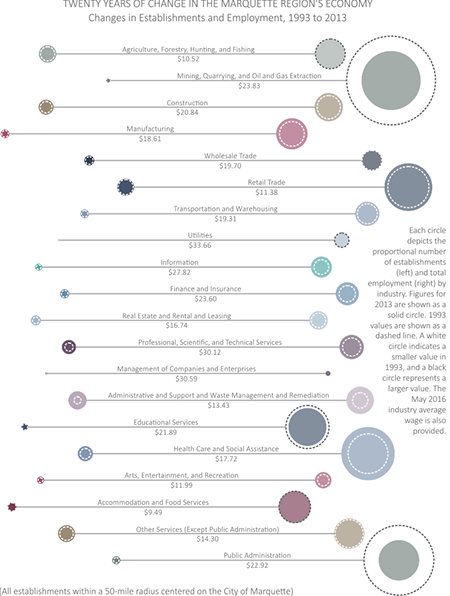