South Park Street is among the most important arterial streets leading into Madison’s center, terminating at the UW-Madison campus and a large regional hospital. At its south end, however, it passes through one of the city’s lower income neighborhoods. City leaders were concerned that there may be few food retailers serving this area.

Our analysis documented current grocery availability, examined the market and financial opportunity for a new food retailer that may located in the neighborhood, and recommended actions that could be taken to encourage a new grocery store development.

The Park Street corridor is constrained by the UW Arboretum and Lake Monona, which cut it off from larger population centers. The area also has very diverse demographics, with a large student population, lower income minority areas, and affluent neighborhoods.

Current food retailers in the area include two very successful Asian groceries and a struggling, older and under-sized traditional grocer. The city’s only Trader Joe’s and Whole Foods are located just outside the corridor.

Our analysis suggested that the one traditional grocer in the corridor is likely to close within a few year, further exacerbating the lack of food retail in the area. Market conditions do not favor that type of food retailer, leaving two viable options.

The City could pursue a limited assortment discount chain such as Aldi, which would meet only a portion of the demand for food.

The other option would be to recruit a destination grocery with a strong selection of international foods. By drawing from throughout the region, the store would be able to generate sufficient sales to support a full line of products including specialty departments. The grocery could also be the anchor for a broader redevelopment strategy branding South Park Street as Madison’s international corridor. 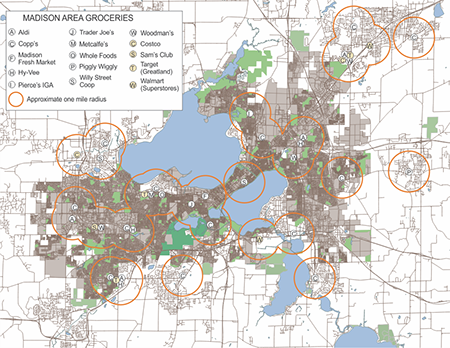