Kingman County lies in the western part of the Wichita metropolitan area. Like other rural counties in Kansas, it has been losing population since the 1930’s, with a corresponding impact on its retail and service sector. There are indications that this trend may be reversing as Wichita’s west side grows, and people choose to live in nearby rural area either because of the low cost or for its amenities.

Kingman is the largest city. The recent loss of Alco and a bowling alley have impacted its business base, but the city has an exceptionally attractive downtown with brick streets and Victorian architecture. It may be possible to capitalize on these features to create a destination district. Opportunities do exist for new restaurants. Existing businesses may capture more sales by enhancing their online presence and diversifying their merchandise lines.

Along with Kingman, the City of Cunningham is located on U.S. Highway 54, which has seen a 20-percent increase in traﬃc in the past decade. Cunningham;s chief opportunity will be to develop a modern truckstop with a convenience store and fast food.

A very large number of new hotel rooms have been added in Pratt, 30 minutes to the west, and a great deal more are located north in Hutchinson and east in Wichita, around the airport. Despite the constraints imposed by this competition, a 40-room midscale property could be supported in Kingman. With a construction cost estmated at $3.44 million, the property was projected to net

If properly designed, marketed, and managed, there would be suﬃcient demand to support an 8,000 square foot conference and banquet facility in Kingman, with a catering kitchen and mix of divisible ballroom space, breakout and meeting rooms, reception areas, and service areas. Once revenues stabilize, the center would require an annual operating subsidy of about $81,000. If  the center were developed as a not-for-proﬁt, using grants and donations to replace debt, the subsidy would drop to about $9,000 per year. This could be further oﬀset through enhanced bookings at the County’s Event Center, if the properties were co-managed and marketed. Economic impact to the City and County was estimated at an additional $18,500 per year in sales and lodging taxes.

To gain competitive advantage, the preferred site consisted of three condemned properties acquired by the County in downtown Kingman. The site will reduce acquisition and development costs, utilizing existing shared parking. One restored building was re-purposed as an oﬃce, visitor center, and small meeting rooms. The remaining facades were preserved to frame a exterior courtyard that expands the functional space that the center can provide, while the conference center was shown recessed on the site. An adjacent lot could be landscaped to provide additional patio space. 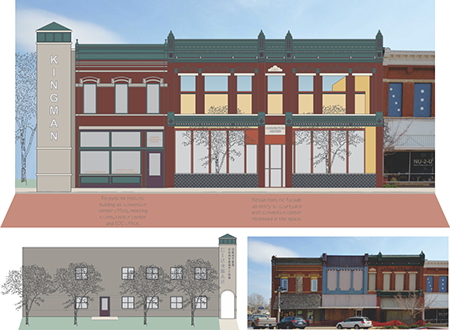 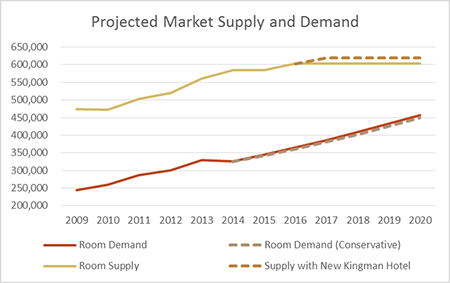