Situated on Interstate 40 and Historic Route 66, Gallup is by far the largest city between Albuquerque and Flagstaﬀ. It has a strong pull factor, but in recent years has been losing market share. Place Dynamics was retained to conduct an analysis of the retail, dining, and lodging markets, identify speciﬁc targets for recruitment, and lay out a strategy for commercial development. This work included strategies for the Route 66 strip and the historic downtown.

Gallup has a huge trade area, in large part due to the loyalty of Native American households, who make up three-quarters of the market and prefer Gallup over Flagstaﬀ and Farmington, which have not been "Indian-friendly" communities. Although a low income market, there are nearly 200,000 residents, and the population is expected to grow after continuing to decline through about 2015. The city's main challenge will be to attract mainstream retailers to keep up with recent growth in the larger cities.

Competing cities are strong competition, but Gallup can retain and win market share through the loyalty of its base. The key will be to attract mid-tier store chains such as Target, Sam's Club, Best Buy, and apparel chains. The most likely sites for this new development are on the north side of Interstate 40. Sewer service will need to be provided, and a new interchange east of Highway 491 will improve access. Recommendations were also provided for the Rio West Mall, which is struggling to attract high quality tenants to vacant spaces. Ideas included reopening the theater with dining, and reconﬁguring the mall to place stores and restaurants facing the outside of the building.

Strong tourist traﬃc adds signiﬁcantly to the market opportunity, with more than 100 stores supporting over 80 percent of the international trade in Native American jewelry. More than 2,000 hotel rooms are already located in the city and over $65 million is spent on dining. The city can support new hotel rooms and should initiate a program to encourage older properties to renovate.

Dining and additional specialty retail uses were recommended in the downtown and along Historic Route 66. Place Dynamics identiﬁed speciﬁc retail, restaurant, and lodging chains that suited to Gallup's market. We prepared detailed proﬁled of priority targets and created a marketing piece for the city to use in its recruitment eﬀorts.

The City of Gallup, Howard Hughes Corporation (owners of the Rio West Mall), and Gamerco (owners of the prime development sites) have begun to collaborate on site development and marketing. The market analysis will be used to promote Gallup through ICSC's regional and national deal-making events. 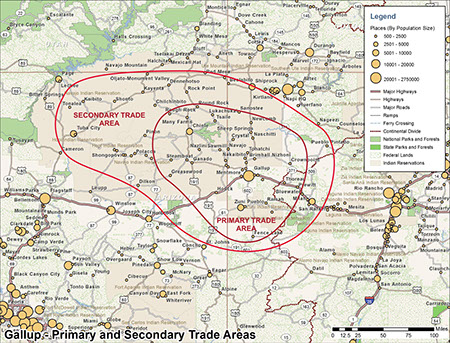